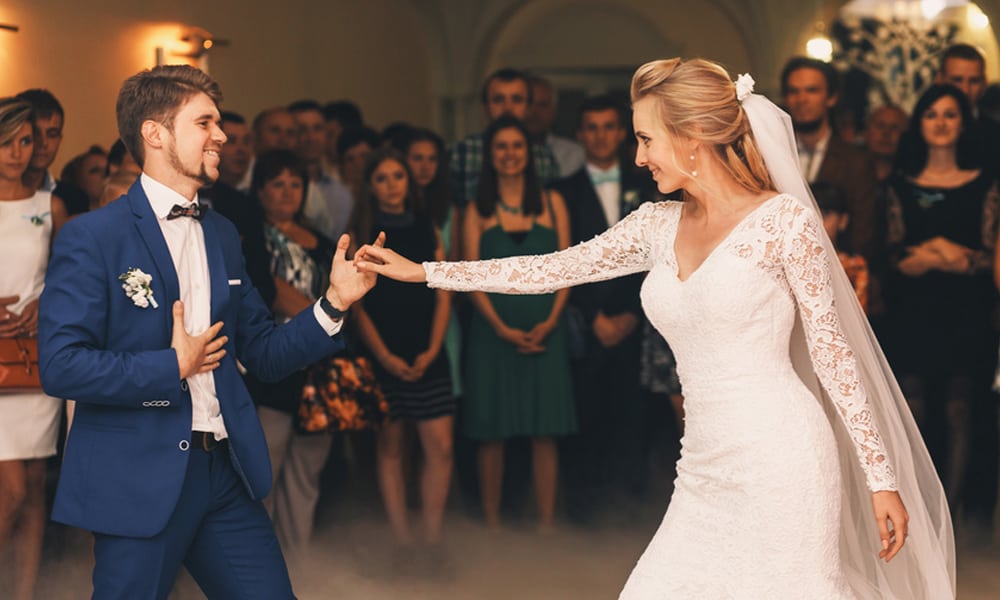 As event performers, who’ve watched families from different cultures come together in Spain, we know that if there’s one thing that unites people – it’s dance.

And from my own personal experiences, I can tell you it’s the Latin dance songs that are best able to create that transcendent energy among people.

So for those of you choosing to incorporate some Spanish tracks into your wedding or party playlists, I present to you my list of the best latin dance songs I know!

This 80’s hit does really well to get your audience in the groove, without trying too hard.

The band gained international stardom in 1987, when their cover version of Ritchie Valens’ “La Bamba” topped the charts in the U.S., the UK and several other countries. In 2015, they were nominated for induction into the Rock and Roll Hall of Fame.

It’s just a pure, upbeat Spanish classic and one of best latin dance songs of all times.

Yes, I’m captain obvious, but there’s a reason this song broke all those records. If I’m going to talk about the best Latin dance songs, then I can’t, in good conscience leave this out.

If it’s good enough to be performed at the Latin Grammys, it’s probably good enough for your wedding.

Vivir Mi Vida is one of those classic Spanish dance songs that just demands audience participation. It’s got an incredibly catchy tune and is just a great track overall.

Suave, saucy, and just the perfect song to play at an intercultural wedding. This song perfectly represents everything that makes Latin music so easy to groove to.​​​​

The thing that makes most Latin dance songs stand out is the rhythm. There’s no better song to represent this than the mischievously quick-paced rhythm of La Vida es un Carnaval.

A frequent feature in Billboard’s Top Ten Latin songs, Don Omar never disappoints.
This song was a huge hit in Europe and a consistent essential on dance playlists. If you want to raise the energy on any dancefloor, this song should do the trick.

What do Enrique and Bachata have in common? They’ve both had an interesting evolution over the years.

Enrique has always branded himself as the romantic, dreamy artist, and with loco he definitely managed to get that across in typical bachata fashion.

The song became an international success both in places of Spanish speech and in North America and several countries of Europe. He obtained the number 1 in Mexico, Colombia, Spain, Dominican Republic and in the Hot Latin Songs of Billboard.

In the United States, more than one million copies were sold, so it was certified with the platinum record Worldwide, it achieved sales of eight million, making it the tenth best-selling song of 2014.

This reggaeton hit is a great song to play at any event that involves a dance floor and is one of the best latin dance songs in the last decade.

9. Let's Get Loud, by Jennifer Lopez

A great success of the exuberant Jennifer Lopez, a song full of energy and that evokes the catchy rhythm of Chachacha, you will see how everyone stands up to dance this musical genre so simple and fun for everyone.

And that ends our list of, what I consider, the best Latin dance songs.

Agree? Or agree to disagree? Drop-in a comment and let me know!

Be sure to check out the rest of our blog for more inspiration and advice on wedding planning and all things dance!

Do you like this post? We appreciate your time and hope we have helped you with this top 9 best latin dance songs for weddings. If you liked it, do not hesitate to share it on social networks with the buttons you will find below to reach more people, we also invite you to leave your comment. We hope you come back soon and we wish you a great day.

We are Calle Habana, a professional music band specialist in performances for weddings and events for more than 15 years. We are passionate about everything related to the weddings and entertainment world and enjoy every minute that we share our music with all of you.

5 Popular Salsa Songs to Dance at Your Wedding

Close Menu
T. +34 691 449 992 / info@callehabana.es
We use cookies on our website to give you the most relevant experience by remembering your preferences and repeat visits. By clicking “Accept”, you consent to the use of ALL the cookies.
Cookie settingsAGREE
Política de privacidad y cookies

This website uses cookies to improve your experience while you navigate through the website. Out of these, the cookies that are categorized as necessary are stored on your browser as they are essential for the working of basic functionalities of the website. We also use third-party cookies that help us analyze and understand how you use this website. These cookies will be stored in your browser only with your consent. You also have the option to opt-out of these cookies. But opting out of some of these cookies may affect your browsing experience.
SAVE & ACCEPT
Powered by